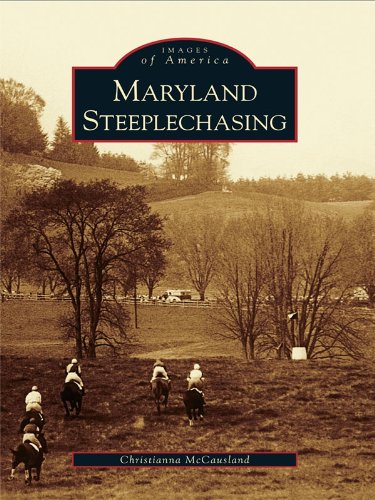 Steeplechasing is like no other sport. Use the details around you to your advantage. Believe me, in many cases you will be plenty close enough to the action. Prepare for the worst weather. Steeplechasing is a sport that runs rain or shine. You may get lucky and get a perfect spring or fall day to enjoy the races.

But as we all know, spring, and especially April and May, can bring some wild weather. Pack rain gear for you and your camera if there is ANY chance of inclement weather. But while it may be wet and nasty out, the horses will still be running. Mud covered horses and riders can bring drama to a normally boring photos. It also makes for some killer black and white photos. Bring a variety of lenses. Though the action will generally be far closer to you than it would be at Santa Anita, there will still be instances where a zoom lens will be handy.

Learn the sport. Though the basics of horse racing is all the same, first horse to the finish line wins there is obviously a great deal more to it than that.


Know where the jumps are and definitely know what kind of jumps the horses will be racing over as there are two kinds of steeplechase fences. Hurdle racing runs over black plastic brush fences and Timber racing over post and rail wooden fences. Know how many times the horses will run past you too. The first time they come by, the action will be less intense.

Know what is going on and you will be better prepared to capture the moment. It is worth noting that steeplechase races are non profit events with proceeds going to local charities. I do buy prints! And like any ritual, this one calls for celebration -- a series of tailgate parties, each more elaborate than the next. On the Saturday of the Grand National -- held on several farms, including two belonging to the sport's leading families, the Griswolds and the Fenwicks -- it is cloudy with bouts of drizzling. But, says Margaret Worrall, a longtime steeplechase official, writer and enthusiast, ''we race rain or shine.

The Grand National was started by a group of young men who were not old enough for the Maryland Hunt Cup, which happens to be the oldest timber race in the country. The cup was established in when members of two competing hunt clubs got into a debate over who was the county's best fox hunter. They decided to settle the argument with a race to determine whose horse had the best jumping ability and endurance.

The Grand National, started a few years later, has shorter fences. And My Lady's Manor -- the kickoff race and the easiest of the three -- came along in Worrall's husband, Douglas, a steward and former trainer, stands inside the paddock, looking over the horses, which are being saddled by the jockeys and their assistants.

Some of the horses are jumpy, so they must be walked a bit longer. Voss, the sport's top trainer, smokes cigarettes and confers with his jockey, Blair Waterman, a petite brunette. The endless caravan of Land Rovers, BMW's and Volvo station wagons making their way along the dirt path to the parking area would seem to belie that fact. Some spectators park and survey the 18 timber fences. Others study the program, offering their predictions -- Sam Sullivan, a 9-year-old gray gelding trained by Voss, seems to be the favorite.

But most are enjoying the start of a long afternoon cocktail party. Meanwhile, their husbands mix the first of many gin-and-tonics in the back of their S. Tennis rackets, golf clubs, ducks, dog prints and, of course, horses are endless preppy signifiers that say, ''People like us. A scrum of young boys, wearing baggy shorts, polo shirts and impish ''Igby Goes Down'' grins, cradle lacrosse sticks, while their older brothers study the blond fillies this side of the fence.

Evelyn Zink is picking at a deli platter of turkey and ham. We'll do that and the tablecloth next week at the Hunt,'' she explains, pulling out a jumbo-size squirt bottle of Hellmann's mayonnaise from the car.

Her friend, Michael Flanigan, in shorts, knee socks and penny loafers, holds up a tall glass of pale green liquid. A mint julep? Lee was the longtime bartender at the Greenspring Valley Hunt Club, and his concoction of lime, mint, sugar and other ingredients is the elixir of choice. The adults add it to vodka or rum, while the kids guzzle it with club soda -- like a sparkling lemonade.

But Flanigan isn't sold. Nearby, a white limousine sits parked among the Saabs and Volvos, looking as if it made a wrong turn from the Belmont Stakes. A black Jeep Cherokee, with tinted windows, is parked alongside it. 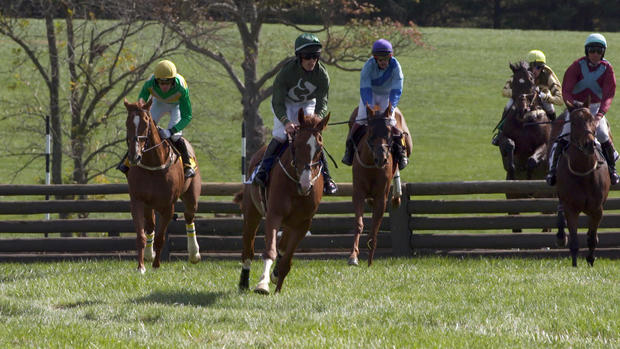 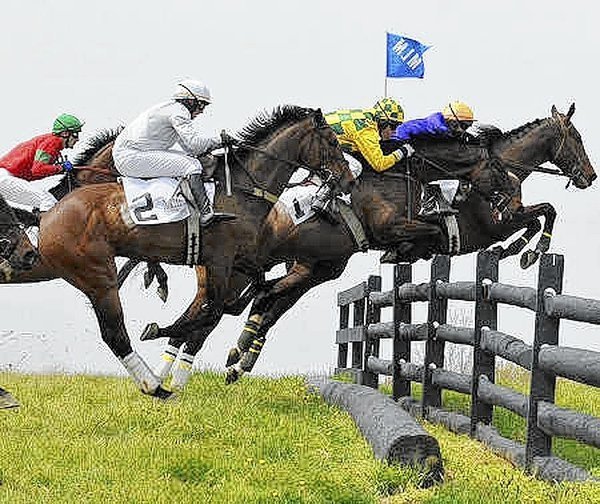